The Peloponnese city of Nafplio was to be our last stop on our way through Greece. We heard many great things about Nafplio both from friends as well as locals. They told us that Nafplio was one of the prettiest cities and it was often described as romantic. 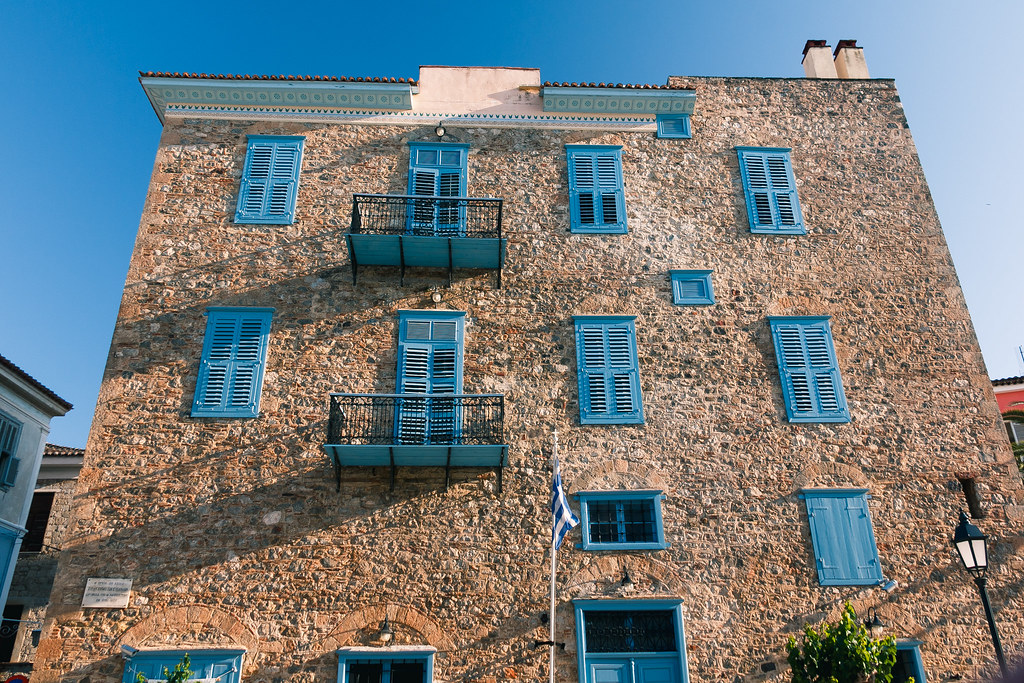 The old center of Nafplio is located on the tip of a bay, wedged between the harbor and some hills. As a result, the streets are narrow and steep and there are only a few places to go to by car. We weren’t completely sure about the location of our hotel, so we had to do some driving, search, Googling and cursing. Eventually we found a hotel by the right name, only to realize that it was only part of the hotel we were looking for and that the other (prettier) part of it was run by the brother of the owner, further up the hill. 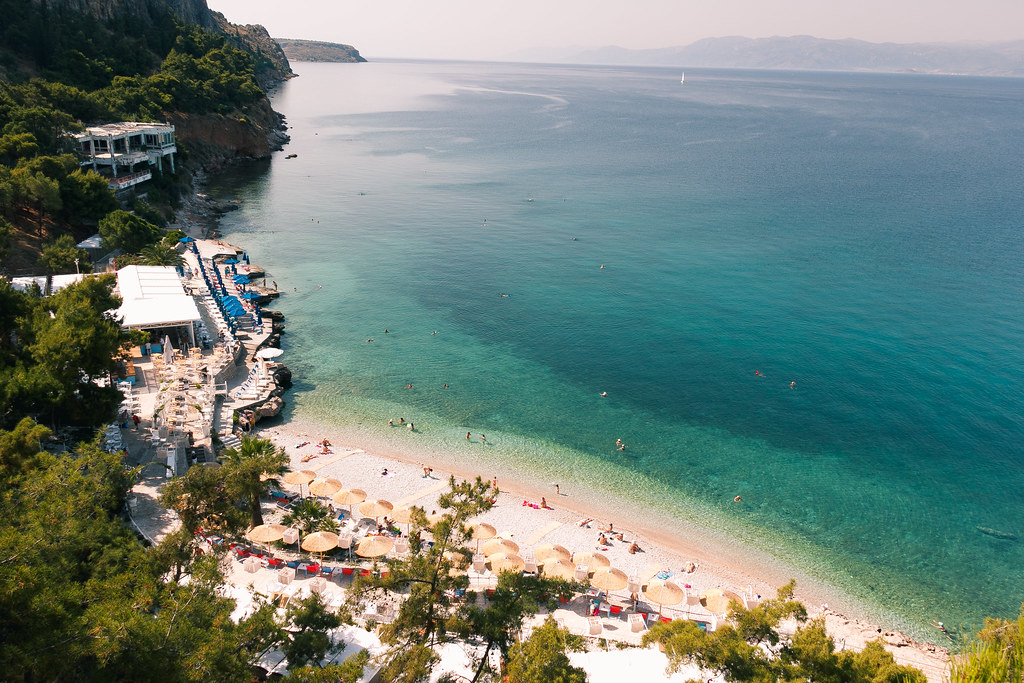 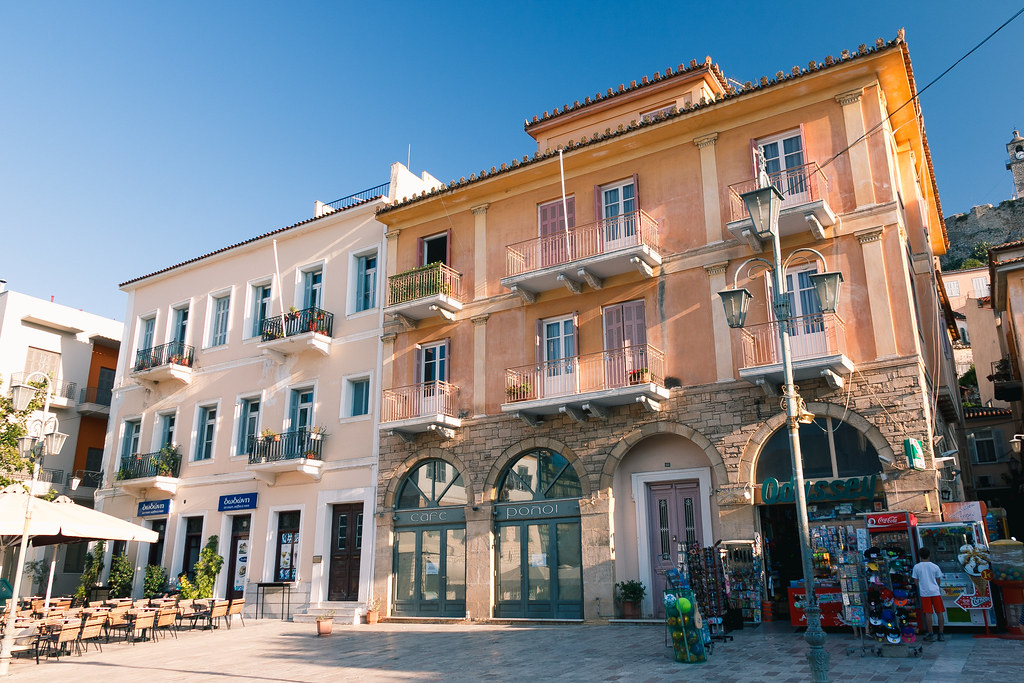 Eventually we found our hotel which had a grand view of Nafplio and the harbor, and could only be reached on foot. From there it was possible to take one of the many stairways down into the city, past the many stray dogs and cats and beautiful houses.

Nafplio was the capital of Greece from 1821 until 1834, and it still radiates some of its grandeur. There is Palamidi castle, towering high above the city, and there is Plateia Syntagmatos (Syntagma Square) in the city-centre. The streets and houses in Nafplio are incredibly well preserved and cared for. While there are a few of the mandatory tourist shops, the rest of the store-fronts are either really good restaurants or tasteful local shops. We were especially taken over by the myriad of absolutely sublime Tavernas we encountered, making us wish we could dinner three times a day.

From our hotel it was only a short walk down on the opposite side of the hill to a tiny and crowded beach. Once we saw the pre-arranged sun loungers, the busy waiters (!) and the constant stream of music we decided to skip it and head for another beach a little further away. Not wanting to take our car (and lose our parking spot) we actually walked there on our first day. This was a rare instance where we regretted our decision to do something during this holiday. The gravel walkway to the second beach was cared for and gave us some beautiful views of the coast, but it was also without any shade and took us almost an hour. When we arrived we had already been burnt by the sun, so there was not a whole lot swimming we could still do. The next day we took our car, but by then we could only sit in the shade, shirts and everything, and I still looked like a lobster the next day. But we still had a great time, the city and the food made up for any inconvenience. 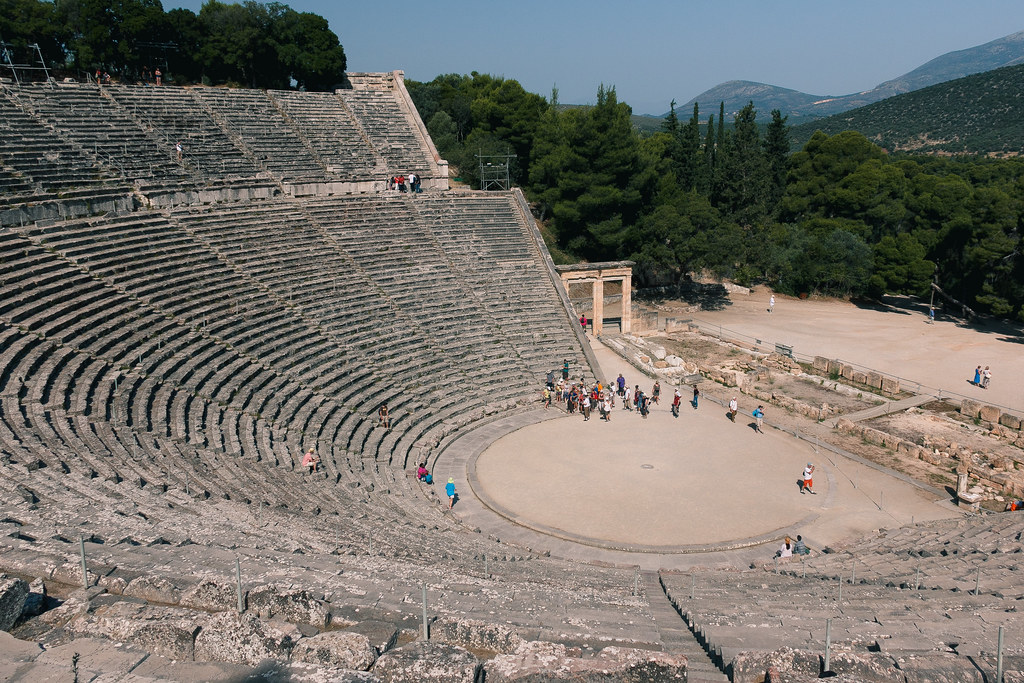 We also found time to visit the ancient Greek city of Epidaurus, not far from Nafplio. Since the sun promised to become unbearable on that day, we had driven there earlier than usual. The huge amphitheatre of Epidaurus was another childhood memory I could recall, and I was glad that we went there again. Apart from the theatre, the stadium and a lot of columns, there really isn’t too much to say about the site except what I had already critised about Olympia.

On our last day we left Nafplio to drive to Athens airport directly. The only stop we had planned on that drive was at the canal of Corinth. I distinctly remember visiting Corinth as a child, but seeing the narrow and steep canal driven into the sheer rock was nevertheless an impressive sight. Since we weren’t in a hurry, we didn’t immediately get back onto the highway to Athens but instead took the small old national road going the same direction. This way we saw the small bridge at the far end of the canal, an interesting and fitting way to end our vacation. 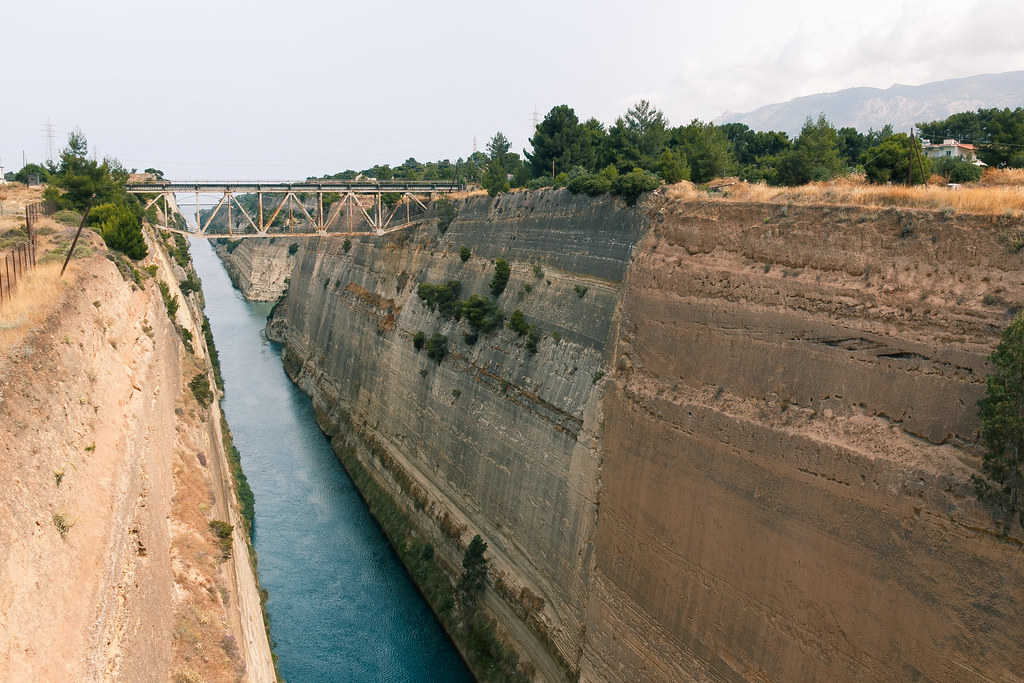 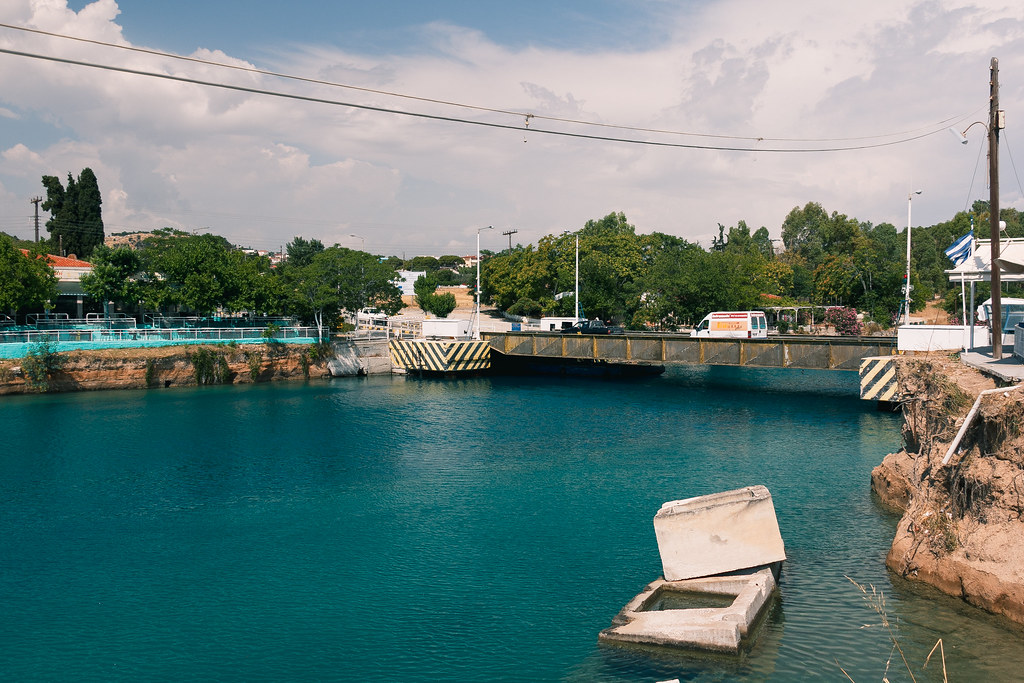 Greece has been an absolutely awesome vacation in every way. The weather, the landscape, the food, and the people all make this one of the top destinations to go to to relax. In hindsight, it would certainly help to read up on ancient Greek history and mythology to be able to take in the wealth of historic sites. Also it really pays of to be able to read (and pronounce) the Greek alphabet fluently (lower- and uppercase), this will help a lot when navigating the roads. I was particularly impressed with the diversity of the Greek countryside, going from flat, arid Olive plantations to mountainous dense forests within an hour of driving. Last but not least, we didn’t notice the Euro crisis that everyone was talking about back home, and we were always warmly received by our hosts.