I thought about calling this post “A tale of two cameras”, but showdown sounds much more dramatic, so here we go. 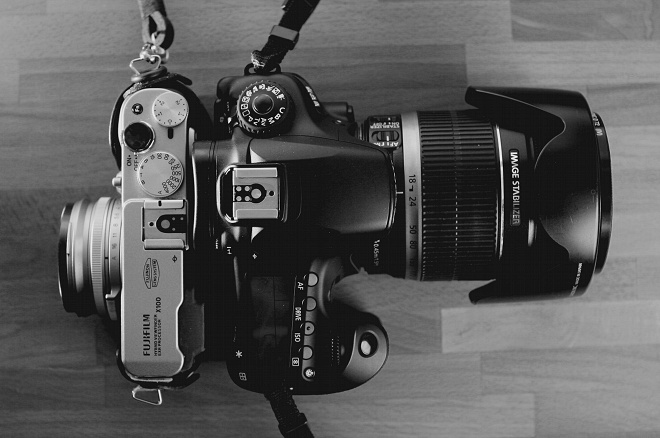 As you probably know I bought not one but two cameras this year. I started with the relatively conservative choice of updating my DSLR from the EOS 400D to the EOS 60D. I didn’t regret that purchase one bit. But then I got myself the Fujifilm Finepix X100 a few months later, at basically the same price-tag as the EOS 60D.

The similarities between these two cameras end on the spec-sheet: Both cameras have an APS-C sized sensors, and that’s about it. In every other aspect, the cameras are very different. After a few months of using both cameras equally, I have come to terms with each camera’s strengths and weaknesses. On our recent 3-week-trip through Canada I always carried both cameras, so I always had the option of using either one.

Let’s start with the obvious things. The photo above shows the cameras as I carried them through Canada, the X100 and the EOS 60D with my EF-S 18-200mm. This is not the smallest lens, but the rest of my lenses are prime, and I want that focal range when I’m on vacation. The X100 is much smaller, but still no compact camera. You won’t fit any of these cameras in your pocket, so you’ll end up with either camera slung over your shoulder or in your hand. The 60D is not too heavy, I carried it while hiking up very steep trails and wasn’t constrained by it.

There were only a few occasions where I would have to put the 60D away into my backpack. When we were in restaurants (with small tables) and in particularly crowded shops.

The fixed focal length of the X100 is no match for 18-200mm. For street-photography, the X100 is great, but for everything else I would have seriously missed the focal range both on the wide and narrow end. It was in Canada where I really discovered how much the Image Stabilization in the 18-200mm helps, for photos but even more so for video, which I shot a lot of. At anything above 50mm, video would have looked terrible without IS.

This was a constant up-and-down for me with the EOS 60D. In the first few days I found myself constantly adjusting the picture style, metering method and dynamic range on the 60D, not quite happy with the results I was getting. I often took two shots with different exposure adjustment. Then again, the weather was quite bad on those few days.

After a while I settled on the “Faithful” picture style and center-weighted average metering. I also enabled Highlight Tone Priority. The pictures come out the way I want them most of the time now. And they also came out ready to be used without much post-processing, save rotation and crop.

With the X100, this aspect of shooting seems much simpler. First of all, the automatic white balance and color reproduction are great, but so is the metering. I guess that one of the reasons that I’m having so few problems with metering is the Electronic Viewfinder. If Canon decided to make a 60D-like camera with an electronic (or hybrid) viewfinder, I would probably use it frequently.

This was our first vacation where I shot some video. It will need lots of post-processing, so bear with me for the time being. Video is great on the 60D and barely usable on the X100, so that was an easy choice.

When to use which camera

By now I’ve developed a kind of instinct when to use which camera. Whenever I’m indoors, the X100 is the only real choice. It’s superior with artificial light, in terms of ISO, automatic white-balance and metering.

But the EOS 60D has the clear advantage in outdoor situations. Here, white-balance is easier, and doesn’t change much. High ISOs are usually not needed, and the polfilter on my 18-200mm brings out great colors. At night, the X100 is the better choice once again, because of it’s ISO performance. But the AF in the X100 does have its problems, which is something to keep in mind when photographing action.

Two very “accurate” images from the EOS 60D, only that the left one is not as pretty

The main difference is that the images from the 60D are very accurate, which can sometimes be a bad thing. The X100 often renders a scene more beautifully than it really was, which is great when you’re photographing people.

I was contemplating selling my DSLR kit at some point, if only for a short time. There were weeks when I didn’t pick up my 60D once. Our Canada vacation reaffirmed me that it’s worth keeping (and carrying) both cameras, for they both have their unique strengths. In the end, having two good and very different cameras only drove the point home that great photos are the work of the photographer, and not of his gear. I shot equally good and bad photos on both cameras, and I wouldn’t have taken significantly better photos with a EOS 5D or an expensive L-lens.