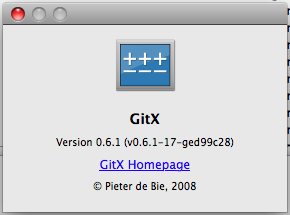 Debugging programs for yourself (or from bug-reports from other people) requires knowing which version caused the bug. Of course most people think in terms of major releases, but a developer needs to know the exact revision, as this might make the crucial difference. UNIX command-line programs usually offer a –version switch, which returns detailed version and build-option information.

If you want to have something similar with Xcode you can use the “New Run Script Build Phase” to add a simple script to your build-process. In the case of GitX, the code looks like this (the original can be found at xcode-git-build-scripts at GitHub):

Needless to say that this script is not very error-resistant, but since ruby is included with OSX and people compiling GitX usually have git installed, it should work in most cases.

I just discovered that the CFBundVersion is supposed to be a monotically increasing integer, separated only by periods. This is required by MacOS and things like Sparkle. The string “git describe” returns doesn’t match these criteria, obviously. So, if you encounter problems, you should fall back to using the format of x.y.z.